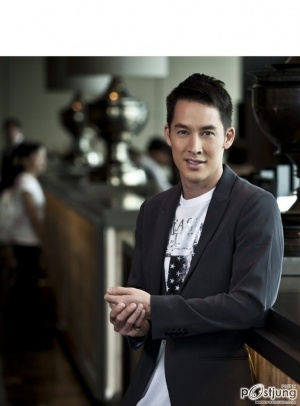 You knew him as the wacky MTV VJ of “Bangkok Jam” many years ago who enjoyed making faces at the cameras while hosting his shows. Now a permanent resident of MTVASIA in Singapore he has come a long way. Off MTV, UTT also enjoys fame in the region, for instance such as his homebase in Thailand for his strong performances in acclaimed soap operas (lakons) like 'Song Kram Dok Rak' and 'Khun Chai ' and also making his face known in the region modeling in ASIA for such brands like GIORDANO. This did not come easy for the entertainer known to his fans as simply “UTT”. When he first entered the industry 10 years ago, he did not even enjoy acting and saw it as another means to diversify his income stream. His lack of passion for the craft metamorphise in his earlier works where critics panned his performances as “wooden”.

All these changed the day UTT met Noppol Komarachun, who directed him in the 1998 hit series' Khun Chai'. It was Noppol who taught UTT that there is more to acting than just memorizing lines and looking sharp for the camera.

To be able to live and breathe the role would allow the actor to send a powerful message out to the viewers, and thus indirectly influencing and educating them on the message or issues behind the story.

UTT was reunited with Noppol once again and the result was the smashing hit series 'Song Kram Dok Rak' which received an award from the Red Cross Society for its inspirational portrayal of the negative issues surrounding the Thai society. UTT was later selected as the spokesperson for the Red Cross as a result of his poignant portrayal of an Aids patient in the series. Since then UTT has tackled two series in Thailand 'Ratamanee' and 'Gularb Ren Fai' as well as acted on the series 'Oh Carol' and 'Oh Carol 2' alongside Carol Cheng in Singapore , all which had good ratings and overwhelming feedback.

Born Asda Panichkul to Thai immigrants in the United States 28 years ago, UTT grew up in the sunny valleys of California aspiring someday to be a doctor or philosopher. An active kid, he was the only child in the family before the birth of his baby brother Gerald six years later.

Growing up, UTT was always the quieter one in comparison to the hyperactive Gerald who was always labeled the clown of the family. The boys grew up completely soaked in the American culture, which can be seen in UTT's personal attitude and character which is a mix of Asian humbleness with the confidence of an American upbringing.

Back then his westernized ways worried UTT’s mother so much that she decided to bring him back to Asia for him to re-discover his Asian roots and values. Being left behind in Thailand with relatives that UTT hardly knew and with no money, his priority was to find a way to buy a ticket back to the sunny California that he knew best.

He remembered a talent scout who spoke to him during his last visit to Thailand and thus picked up the phone book to see if he could locate her. He did and the rest following that phone call was history…

UTT is considered one of the top celebrities in Thailand. His credits range from acting, hosting , to modeling. In Singapore he was voted alongside with international stars like Zhang Ziyi as Asia's 20 Beautiful Stars by leading entertainment magazine 8 Days.

Today, he spends most of his time alternating between being a VJ for MTV, acting for Thai and Singapore serials as well as hosting and modeling in the region. UTT hopes to be able to break into new markets in the near future and to expand his acting in foreign productions.