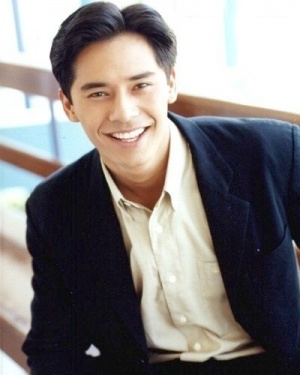 Patson was a sportsman during his youth. He participated in various sports, such as skiing, baseball, and especially American football. He has special interest in American football and started playing at the age of 8. At 15 years of age he worked at a pizza shop to earn money. At 20 years of age he worked at a Law Office in Atlanta, GA to earn extra income. In 1994 during a stay in Thailand, he modeled for various fashion labels. This was when he debuted as an entertainer. Besides modeling and working in advertising agencies he was also cast in a music video by Mickey and had a small role in the 1994 American film, "The War" which starred Kevin Costner and Elijah Wood, thus marking the beginning to his career in acting. Although his role was not significant it gave him the necessary experience to embark in an even more exciting journey through Thai soap operas, aka Thai lakorns. After acting for a little over a decade, he gave up acting.

Pat stated that one of the main reasons why he stopped pursuing acting was the language barrier. He also said that acting wasn't as stable of a career as it is today. Back then, it was hard to receive work. Once you finished filming a lakorn, you had to wait to be contacted for another lakorn in contrast with today, where actors have multiple events, become product presenters, and receive many magazine photo-shoots one after another right after they're done filming lakorns. So for him, it was important to make a career switch before it was too late. He didn't want to risk continuing acting and have his p'ek status fade away from p'ek to villain roles, to supporting roles, and eventually father roles. Therefore, he thought about the future and switched to being an entrepreneur instead.

It was difficult for Pat to make it in the industry because he was westernized. He can be considered to be in the same category as luk kreungs or a farang (mixed children or heritage) since he speaks more English than Thai and grew up abroad. But today, luk kruengs have taken over the industry like Nadech, who is half Thai and half Austrian. They don't have a hard time making it, even with the language barrier because they learn Thai and become better speakers and actors. It's an advantage to be mixed or foreign. So why can't Pat be as successful? Pat said he didn't want to invest time into learning Thai back then. He tried learning at a Thai temple in America and it was difficult.

Pat commented on how his p'ek status days are over, but he's not done with acting yet. If anyone is interested in hiring him, to please contact him after seeing the interview. He also told them to contact his manager. About his love life, he is talking to someone outside of the industry. They've been talking and studying each other for 3 months. He had a player image (jao choo) back in the day because he liked to "talk" to many women at the same time, but that doesn't make him a player. He is a one-heart and one woman man.

Credit: 70-90 Memory Blog for details on Pat and awesome pics & Mahalo at AF for pat's interview.